I’ve said several times how much St Andrews still feels like home to me, in fact I was accused (possibly fairly) of ‘gushing’ when I last wrote about it in Grad week. But I love the place and do not feel the slightest shame in saying so.

After the out-pouring of nostalgia during this year’s Grad week (from lots of my former classmates, not just me) I decided that I had to go have a little visit. My friend Kat is still there, so it was just a case of finding a mutually suitable date. That date was Sunday.

Having been to Callander on Saturday I probably should have stayed at home and got on with the million-and-one things on my ‘To Do’ list – I had a slight realisation of how little I have prepared for my September holiday last night; not to mention my imminent departure for Olympic fun in London this Saturday – however, that is not the makings of a fun time, so I got in the car and went back to the bubble.

There is something about the little town, and as I drove over the crest of the hill that first gives you the vista across the spires, towers and beaches I couldn’t help but smile. 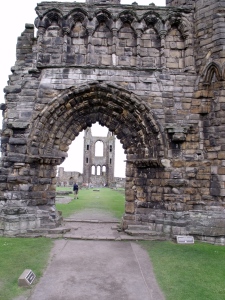 After a quick catch-up, Kat and I headed of for a long, leisurely lunch at Mitchell’s (steak pie with carrots, broccoli and peppered mashed potatoes – not hugely summery, but suitable for the day – and the obligatory bottle of ‘Really Good Red’). Once we’d eaten more than we probably should have we went for a stroll round town to see just how little had changed. From Market Street to Sallies Chapel and the Quad; the viewpoint behind MUSA that looks out over West Sands to the Castle, we wandered for half an hour or so before ‘accidentally’ finding ourselves outside Janetta’s – the world’s best ice cream parlour. And then, even more accidentally, finding ourselves inside.

A short while later we emerged victorious with a scoop of Alpine avalanche (chocolate and honeycomb in vanilla ice cream), white chocolate and raspberry ripple, blueberry cheesecake, and blackcurrant frozen yoghurt. Two scoops each, obviously, not even the power of Janetta’s could have got four scoops into each of us after lunch. On our merry way we ambled, down through the cathedral to the pier, back round by St Leonard’s School where we accidentally ended up in another shop – Luvians. When we emerged back into the grey light of the day I was clutching a couple of bottles and my bank account was a little lighter. But it was so worth it. 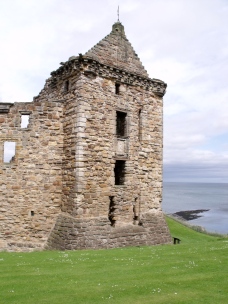 Back at Kat’s we tucked into the Earl Grey Gin, that I had brought (more on this to follow) and generally put the world to rights. If you’re minorly concerned that I mentioned the car followed by multiple types of alcohol, don’t worry I did the maths – I’m severely allergic to having my license revoked, a criminal record or being dead.

The last part of our day was a trip the ever-wonderful New Picture House, St Andrews’ cinema to see The Dark Knight Rises. And it was AWESOME!!!! It’s not often I come out of a film wanting to go straight back in and watching it again; but this time I was sorely tempted. Just the right amount of drama, escapism, creepy villains and bat-suits. What more does a guy need?

By the time it got to 9pm I thought it was time to battle my reluctance and head off home. I wanted to stay, but sadly with work calling for Monday morning and that list of things to do weighing heavily on my mind there was really only one choice. As the rain started falling from the sky, I drove back through the darkening Fife countryside and made it home about in time to pack my bag for the following morning and head to bed. A thoroughly exhausting weekend – not sure I’ve quite recovered yet – but one I wouldn’t trade for an easier life. I love St Andrews, and I want to go back. Now.